I've been working hard at the Tom Paine Printing Press with some new wood and metal type which I've recently acquired, and I'll be posting images here within the next few days. Just sorting and cleaning the type takes ages, and of course the typeseeting, locking up the forme, and printing on the hand press is a slow business.
Posted by peter chasseaud at 13:41 No comments:

New images of Lewes Railway Land, and a painting 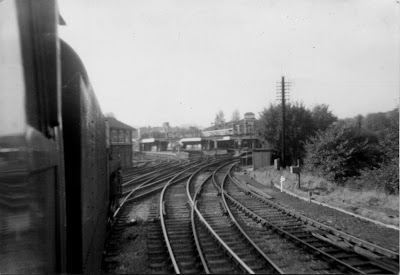 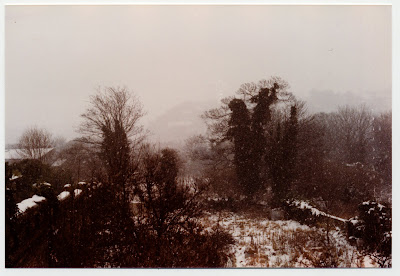 A new version of an oil painting I did in 1986. It's interesting that many of the preoccupations of my recent poetic photobooks (Kings Cross, The Euston Arch, Thames - The London River, The East London Line, etc.) are demonstrated here - the landscape and skyscape, the mixture os urban and rural, the impact of the railway, the steam locomotive as image, my own memories, etc. This scene has long been submerged under new housing developments. I actually travelled on a steam train from Uckfield to Lewes (they used to run from London Victoria to Brighton using this route - a great alternative to the Brighton main line), through this landscape, in 1962.

The photo at the top is one I took leaning out of the train window as it approaches Lewes Station, in 1962, having just crossed the River Ouse (by the Phoenix Iron Works, or East Sussex Engineering as I think it was known by then) and the western end of Cliffe High Street, and run down from the viaduct over the railway land.

The middle image is one of a series of photos I took in the winter of 1985-6 to form a 90-degree panorama of the Railway Land.
Posted by peter chasseaud at 13:23 No comments: