The Art of Lost Words at the German Gymnasium, Kings Cross 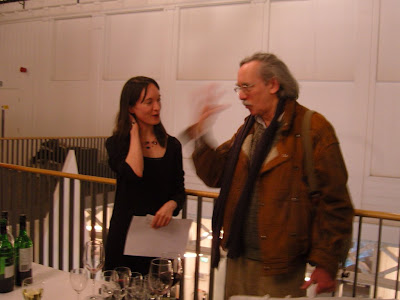 Talking to Rebecca Pohancenik, the curator of the inspiring 'The Art of Lost Words' exhibition, at the PV at the German Gymnasium, Kings Cross, on 6th March. 'An exhibition of new design and illustration inspired by language's forgotten words.' Rebecca asked each of 46 artists to produce a visual response to a lost word. See the Text/Gallery website: http://www.textgallery.info/.

I was in London showing my Kings Cross poetic photobook to galleries, and took this opportunity to revisit the railway land redevelopment area. The landscape has changed since my last visit - as always. But this time the big shock was the absence of Culross Buildings (see photos below), which have been completely demploished. Culross was such a feature of that railway landscape that, apart from one of the StanleyBuildings and the German Gym, there is nothing left in that once-fsacinating space between Kings Cross and St Pancras. Argent, the developers, have a huge model of the railway land on the ground floor of the German Gym, and this shows which of the old railway buildings on the Kings Cross goods depot site will be preserved - luckily quite a lot. 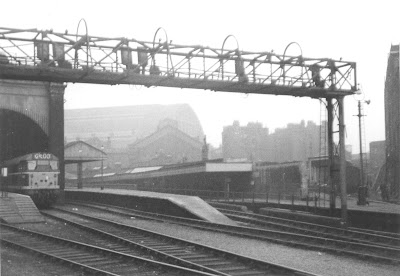 A photo I took in 1967, looking from Kings Cross across the suburban and Metropolitan platforms towards St Pancras, with the German Gymnasium and Stanley Buildings in the middle distance, and Culross on the far right of the photo. 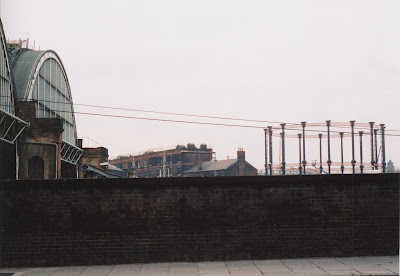 This is a photo I took in 2004, from York Way (old York Road, and before that Maiden Lane), looking across the Kings Cross station area to Culross Buildings. I made a film of Culross Buildings, and the streets around Kings Cross, shortly afterwards.